January's Touristy Thing...and with just one day to spare

My "resolution" for 2012 is to enjoy the city I'm living in and do at least one touristy thing each month. I don't have more guidelines than that, but I'm thinking that most of the touristy things should be things I haven't done previously. That doesn't mean I can't enjoy some of the staples of the tourist life in Shanghai, but there's still so much to see and do here, I can easily find one new thing for each month. And if I do what I did today - two things in one day, well, I should have no problems keeping my resolution.

I could have cheated and let my trip to HK been my touristy thing, but decided that since it was my day off and the 30th of January, I could fit in something here in town. The only deciding factor about where to go and what to see was the fact that I've been meaning to visit these two places for a long time. I'm not actually sure when I first heard about them, but I can recall watching segments about both on the local English channel. I checked the map and since they're very close to each other, I decided to tick both off of my list at one time - kill two birds with one stone, if you will.

For those of you who haven't been to Shanghai (SH) or don't know much about it, let me give you a direct quote from Wikipedia - "Shanghai, China has the largest number of Art Deco buildings in the world." I guess this makes sense since SH experienced its heyday in the 1920's and 1930's, when it came to be known as the "Paris of the East" or "Paris of the Orient." Another quote from Wikipedia: "Art deco, or deco, is an eclectic artistic and design style that began in Paris in the 1920s and flourished internationally throughout the 1930s and into the World War II era." So it's a safe bet if you assume that "1933" is an example of the Art Deco architecture that's so prevalent in Shanghai. Well, you're right.

Now, to be honest, I've never been a fan of Art Deco architecture and design, but it's still pretty cool to say that you live in the city with the most Art Deco buildings in the world (by the way, number two on the list is Mumbai (aka Bombay), India)! And 1933 is so special, it doesn't even matter that I don't like Art Deco.

But what you probably wouldn't guess about this building is its initial use. I won't tell you just yet because I want you to see some pictures. But I must also apologize in advance - no pictures can really do this building justice and show you just how intricate and confusing the design is. In fact, the building has been compared to an MC Escher drawing, so that probably gives you some idea about what you'll see. I have a Canadian colleague named Jeff who's a great teacher, but an even greater photographer and videographer. He's been to 1933 as well and even though he says it was hard for him to get some good pictures, the pictures he's taken are AMAZING! If I had copies of his pictures, I'd put them here for you to see instead (and give him due credit, of course), but all I have to show you are my pictures. I plan on returning some day and trying to get some better shots, so when I do I'll hopefully be able to show you some improved shots of this incredible building. 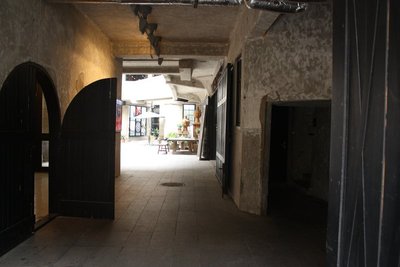 One of the side entrances into 1933 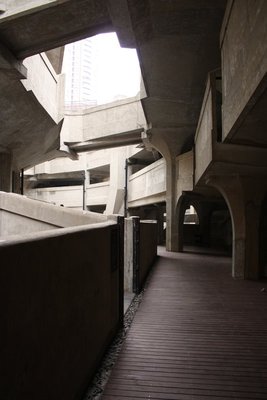 Looking up from the second floor 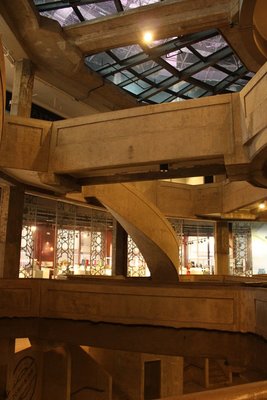 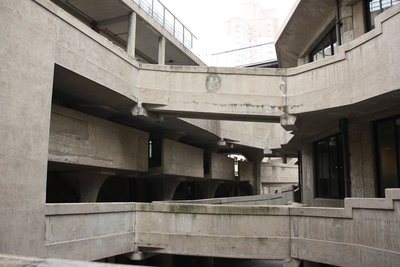 Looking at the connecting ramps between the inner & outer buildings 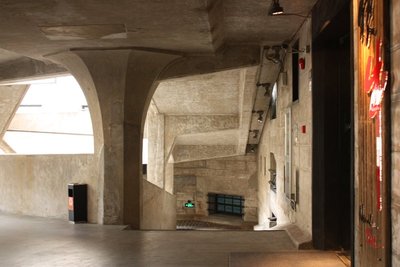 Looking down one of the many ramps inside this building - this is one of the larger, wider ramps 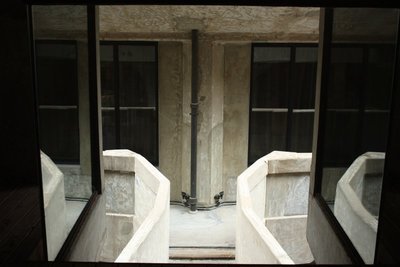 A view in symmetry 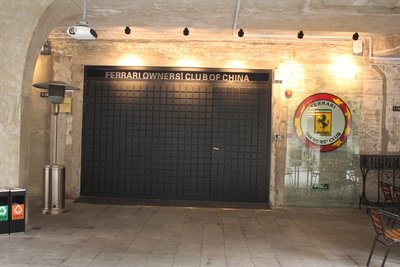 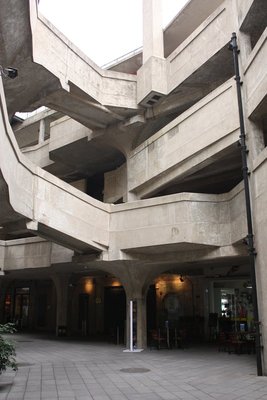 Another view of the ramps 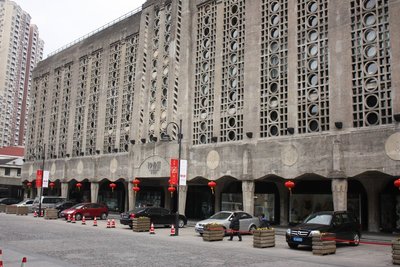 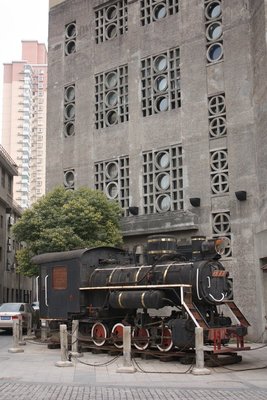 Not sure why there's a train here - another period detail, I guess

If you're wondering about all of the ramps, that's your clue as to the original use of 1933. It appears that you need lots of ramps to help corral all of the cattle in a slaughterhouse. Yep, just like my visit to the War Museum in Saigon, it seems that I'm continuing in my quest (I didn't realize it was my quest) to see examples of the uglier side of life. 1933 has gone through various incarnations in its lifetime. While it started as a slaughterhouse, it's also had other uses, like medicine factory and now hotspot of some of the best restaurants in SH. It seems only fitting that you now go to eat where your food was first butchered.

After wandering around the building for an hour, trying my best to capture the views with my baby DSLR, I walked to the bus, travelled three stops and walked a short distance to my second destination for the day - The "SH Jewish Refugees Museum." Another interesting point of fact about SH is that it provided refuge for around 20,000 European Jews during WWII. Many Jews tried to get out of Europe in the beginning stages of the war, but couldn't leave unless they could show that they had some place to go. Making a rough life even rougher, there weren't many places in the world that remained open to them. A Chinese diplomat, He Feng Shan, who was serving in Vienna Austria during the war felt compelled to help and started issuing visas for Jews to leave Europe. What makes his actions even more heroic is the fact that he was acting against the orders of his superior. To the people of the world that know of his actions, he's become known as "China's Schindler."

The Jews who could came to SH, but were forced to live in a one square mile area in the poorest district here. At the time, China had its own problems as it was being occupied by the Japanese. China opened her doors to the Jews, but Japan forced them to live in the ghetto here. There's still a lot I don't know about their life here. For example, I wanted to know when the first Jews escaping the Nazis came and when the last ones left, but since the time of WWII and just after were very turbulent in China, there's a lot that may never be known. When I visited the museum, an English-speaking guide came out from the ticket booth to accompany me through the museum and she shared a lot of the history that's currently known. However, I noticed that when I started asking her questions, her English began to break down. It was then that I realized she had done a fantastic job of memorizing her part, but that she didn't know much else. Or perhaps she did know more, but just had trouble expressing information that fell outside of the official script.

Therefore, I've visited Wikipedia and other websites to help me try to fill in the missing pieces. Two things of note that I want to mention here are that about 500 Jewish babies were born in Shanghai during the war. It seems that they are some of the more notable visitors to come to the museum and have their art shown here more than 60 years after they were born.

Also of note is that former Secretary of the Treasury, W. Michael Blumenthal, spent 8 years in SH, first arriving as a teenager from Germany. And according to museum staff, he learned English from the local Chinese. What a switch that is! I guess I could start teaching Chinese to other foreigners here, only my Chinese isn't good enough. 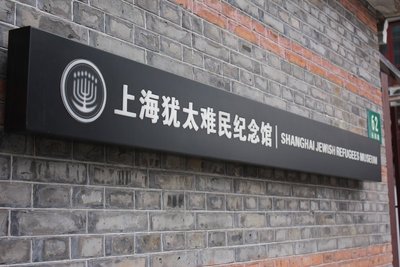 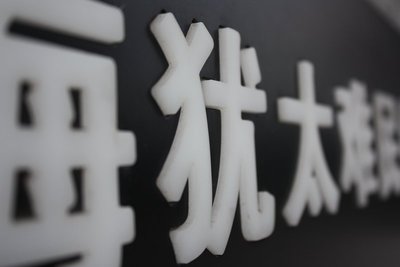 A close-up of the characters "you tai," which mean "Jewish" 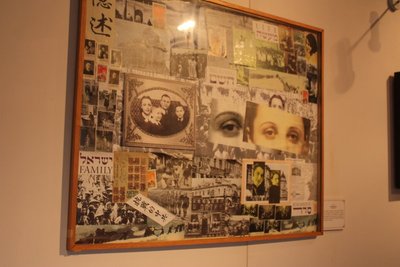 A collage in the third floor exhibition room in the synagogue 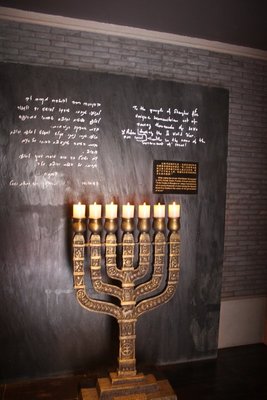 Entrance into one of the exhibition halls 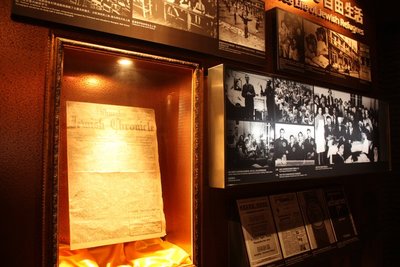 Jewish newspaper, the "Shanghai Jewish Chronicle" which was published all in German 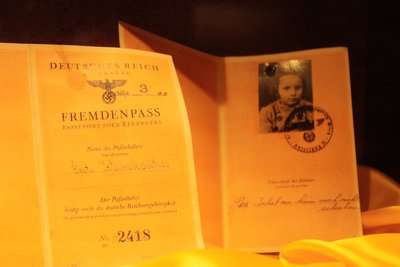 A child's passport - this is only a copy. The original was lost and then found years later when it was bought by a local man at a market. The original was later returned to the owner, now an adult who came back to SH and visitied the museum 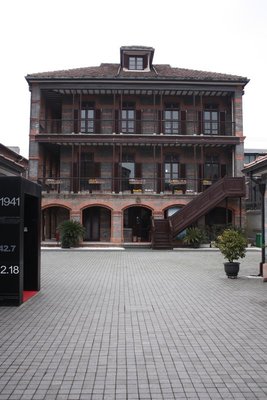 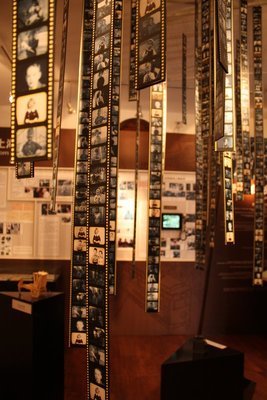 Film rolls showing pictures of the Jewish children in SH 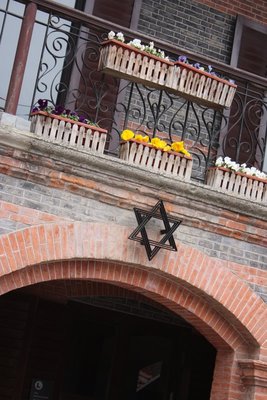 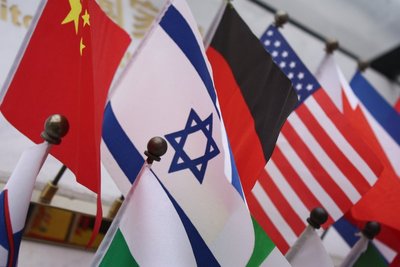 Flags showing the nationalities of all visitors to the museum

Well, it's now February and I haven't decided where I'll be going this month. There are still many places on my "to visit" list, but I haven't really thought about where I'll go next. If you have any suggestions for places that you'd like to see (I say this for my readers in America and other places outside of China), please let me know. I can't promise to visit all of the places that you suggest, but if I also want to go there and it fits into my schedule, I'll be happy to go and then perform in a show and tell for you.

Until then, thanks for reading and hope you're having a wonderful 2012!