There's a group of former students that I've become great friends with. We've travelled to the seaside city of Qingdao together (formerly a German concession, therefore understandably famous for its beer), and last year three of us went to Wuzhen, one of China's more popular and beautiful "water towns." This year, since everyone is now finished studying English and busy working, we can only meet for a day here or there, usually when one of us is having a birthday.

In May, both Kevin and Cindy celebrated their birthdays, so Amanda suggested we visit her husband's hometown of Changshu (top left corner of the map). It's about an hour and a half away, so it was pretty convenient to get there. We started off with lunch at a local restaurant serving local specialties, went to a nice public toilet at Changshu's lake (the smell at the toilets near the restaurant was bad enough to drive all of the ladies away), then drove to Changshu's mountain for the rest of the day.

In some ways, the mountain reminded me of Pilot Mountain in Mt. Airy, near my hometown. I'm from the foothills so the land isn't really flat, but Pilot Mountain still appears as if from nowhere and looms over the rest of the surrounding landscape. In Changshu, the land is very flat, so the mountain resembles a wart on someone's otherwise smooth skin. It's called Yu (虞) Mountain and is named for a man who was buried there during the Shang and Zhou dynastys. I guess this means it must have been in the time between the end of one and the beginning of the other. According to Wikipedia (what did I do before Wikipedia???), the Shang dynasty was from 1600-1046 BC and the Zhou dynasty was from 1045-256 BC.

When we got to the mountain, Anna parked her car and we boarded the shuttle bus that runs between the two extremes of the mountain. We asked a few times after getting on the bus "when do we leave?" Finally the conductress told us that when the other bus got to the bottom, we'd go to the top. What we should have asked is "when does the last bus leave the top of the mountain?" More on that later... 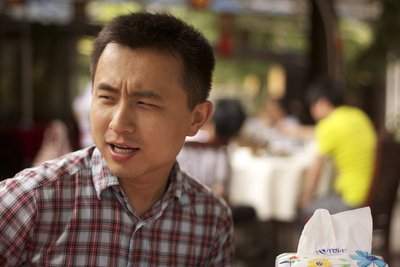 Our one man, Kevin 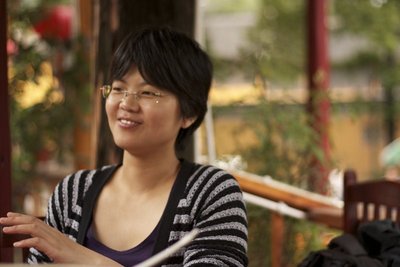 Amanda - it was her idea to go to this lovely getaway 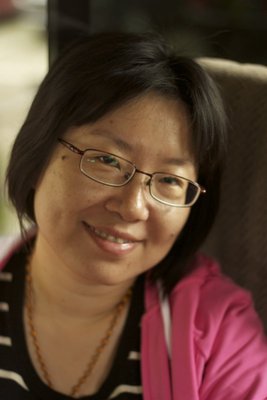 Anna - our driver and leader extraordinaire 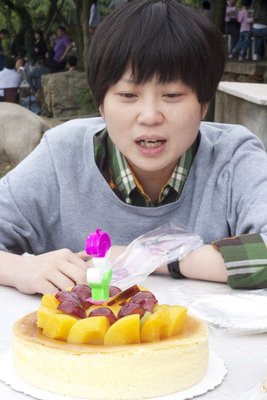 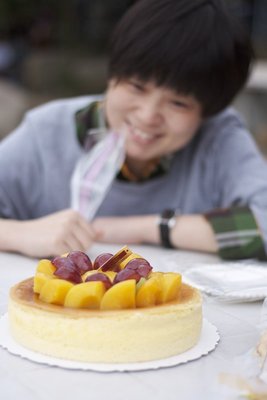 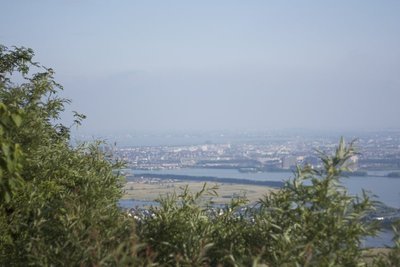 View from Yu Mountain looking southeast back toward Shanghai 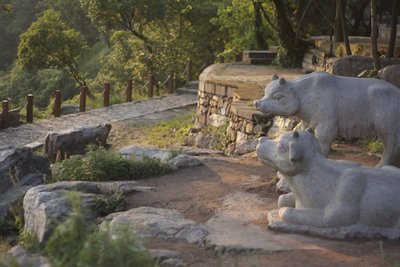 According to Wikipedia, Yu Mountain is supposed to look like a sleeping cow. Now I know the significance of these sculptures placed near the peak of the mountain

When we got to the top of the mountain, we found a teashop offering outdoor tables. Each of us ordered a glass of tea. At 24 yuan a glass (about $4), I thought it was highway robbery! The tea did come with unlimited refills of hot water, though. First, we got down to the serious business of eating the cake, then it was time for games. We played UNO a few times, then Phase 10.

When we finally finished the games, we set off to the Buddhist temple nearby to use their bathrooms. Kevin stayed with our stuff so the women could use the bathroom first. On the way, Anna asked one of the men working at the tea shop, "when does the last bus leave the top of the mountain?" He told us that it had left at 4:00, but by that time it was around 6:00!

There was some panic then because even though it's not a huge mountain, it would still take an hour and a half to walk back to the car (and another hour and a half to drive back to Shanghai). For some reason, I was strangely calm, so I said we could try to find someone who had driven their car to the top and ask if Anna and Kevin could ride back with them to get her car. Then, Anna and Kevin could drive up and meet Amanda, Cindy and I who would have already started walking down. My friends agreed that it was a good suggestion, so we walked back to the ticket office at the bus stop to ask for help. Actually, we found two people who each had a car and got rides for all of us back to the bottom!

It's funny the things I do in China that I would never do in the States. I think if I was stranded at the top of a mountain back home, I'd just hoof it down instead of asking a stranger for a ride. Although now that I think about it, there was one time in high school when I ran out of gas on the side of the interstate on my way to school. My cousin Melanie was with me and when a woman pulled over to offer us a ride, Melanie urged us to take it. The woman dropped us off at school and I went to the office to call my mom and tell her that my little Honda was sitting in the emergency lane of I-40. I had told her the night before that I needed gas and didn't have any money to fill it up, but she said I had enough to get to school. Since it turned out she was wrong, she willingly paid for the tow truck and afterwards always loaned me gas money when I said the tank was nearly empty and I had no cash. And no, I didn't take advantage of her. 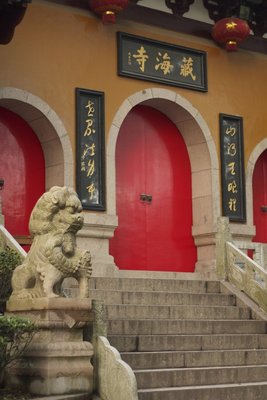 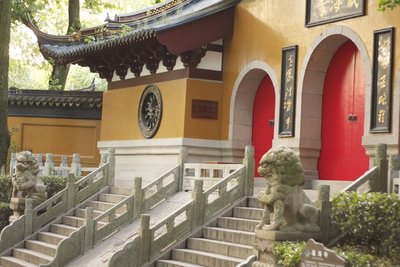 Another shot of the temple. I wish we had taken the opportunity to go inside the temple here - it was beautiful from the outside and I imagine also beautiful inside, but we spent our time at the top playing games and enjoying just being outside 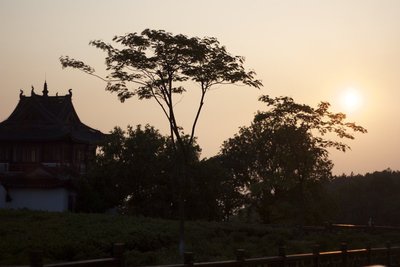 After leaving Changshu, we stopped on the edge of Shanghai for dinner, then everyone headed home having had a wonderful day out of the city. Following are a few pictures from my apartment. Mind you, they aren't of my apartment. I can't take those pictures until I get some cleaning done. 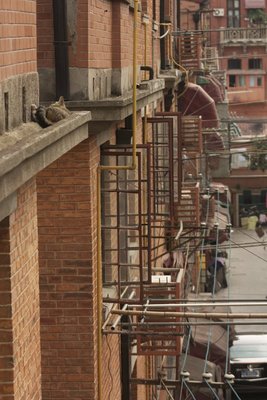 This is the view from my kitchen. There's an acrobatic kitty that likes to hang out on the balcony and ledges of the building next to mine. It comes to spy on my cats, I think. Here, you can see it resting on a ledge about four stories up 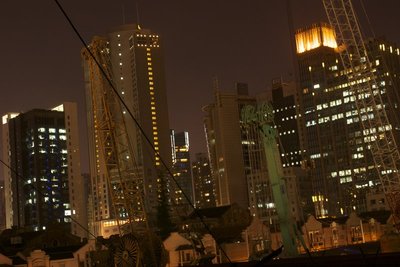 This is a view from my south-facing bedroom window. As you can see, I'm surrounded by lots of different kinds of buildings, both old-style Shanghainese houses and taller hotel and office buildings. Also, you can see the equipment being used for construction of a new subway. Right now, line 2 runs under my building but lines 12 and 13 will also connect here soon. I can't imagine living any closer to the subway than I do right now, which is one of the reasons I've stayed in the same apartment for almost four years 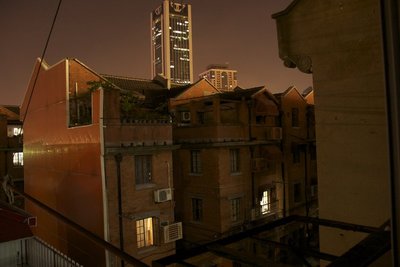 Another view from the same window. This one is looking to the right to Jingan Villas. The villas, which were built in the early 1930s, were modeled on European-style villas and were originally inhabited by wealthy foreigners and Chinese. Now, several families live in a space that used to house just one family. Check out the ugly orange cladding on the sides of the buildings. They were added before Expo 2010 opened in Shanghai. I had hoped they were a temporary fix to give uniformity to the neighborhood, but they're still here two years later

My next blog will be coming soon, I hope. Sunday and Monday are my days off work, so I'm hoping to get my blog up-to-date before I start work next week.

Posted by feiheli 00:10 Archived in China