One of the first books I read after my first year in China was called The Soong Dynasty, by Sterling Seagrave. It's the story of a wealthy and powerful Chinese family who became even more well-known in China and much of the world because of the marriages of the three Soong sisters. Unfortunately, it's been more than 10 years since I read the book so I can't remember more than the bare minimum of its content. I can, however, remember that I really liked the book, so I was interested to see the house where one of the daughters lived. If you like Chinese history and like to read, I highly recommend this book!

But back to the Soong family - the three women grew up in a prosperous family in Shanghai and each attended Wesleyan College in Macon, Georgia (!). As adults, all of the women married very significant and powerful Chinese men. The oldest sister, Ai-Ling, married H.H. Kung, who at the time was the richest man in China and also the finance minister here. The youngest, May-Ling, married Chiang Kai-Shek, who would become the leader of the Kuomintang party which fled to Taiwan after losing the civil war. Ching-Ling was the middle sister and she married Sun Yat-Sen, who is known as the father of modern China. Interestingly enough, both the Communist and Kuomintang parties revere Sun Yat-Sen.

Mao Zedong even has a famous quote about the three sisters: 一个爱钱，一个爱权， 一个爱国 (yi ge ai qian, yi ge ai quan, yi ge ai guo). This means "one (sister) loved money, one loved power, one loved (her) country." You can guess which sister Soong Ching-Ling is.

Her house is on Middle Huai Hai Road and I had eaten lunch off of East Huai Hai Road last Monday. When I left my apartment that day, I didn't know if I would do anything touristy or not, so I left the DSLR at home. However, I always have my little Canon PhD (my mom calls it a PhD camera because all you have to do is "push here, dummy") on me, so I could still take pictures on a spur of the moment trip. I checked the map before leaving the restaurant and decided that a bus would be the best way to get there. In fact, I rode several buses last weekend - after all, you've got to get back up on the horse after you fall off (for those who don't understand the reference, it's because my iPhone was stolen on a bus the Monday before). I got off at the stop that should have been nearest her house and I wasn't wrong - it was directly across the street from her house! Tickets were cheap - just 20 kuai (which is just over $3), so I handed over two 10 kuai bills (all I had in the way of bills, incidentally) and went into the complex. 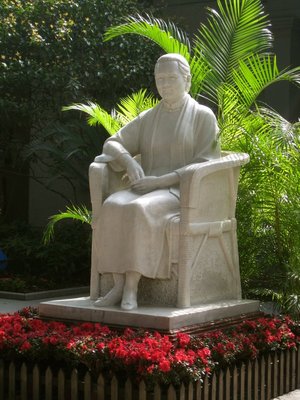 Of course, once you go inside the buildings, pictures aren't allowed. I always prefer not to use a flash when taking pictures, so I know that taking photos that way shouldn't harm or fade the items you've pictured. That's why I sometimes wonder why places are so adamant about not letting you take pictures inside. I think the only reason is that they have books, postcards and pictures that they want you to buy from the gift shop. If you really want a picture of the room, you'll buy the book I suppose. It worked for me, anyway, the first time I visited Biltmore Estate in Asheville. 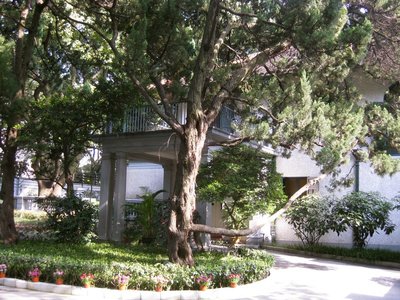 The front entrance of the house

Therefore, the only pictures I have to show you are of the outside of the house. The house itself looks normal from the front and huge from the back. However, once you're inside the scale is actually very reasonable - just like a normal house. In Shanghai, though, it is considered quite large. There's a living room, dining room, kitchen and a couple of bathrooms on the first floor (perhaps just half baths - you can see a sink from the open doorway, but the velvet ropes bar your entry). On the second floor, there seemed to be just two bedrooms, one office and one bathroom. A part of the second floor was closed off as well; since it was the part above the kitchen, I suspect it was very small servants rooms. The house is perfectly preserved as it was when Soong Ching-Ling lived there. Translation: it's like your grandma's house, with all of the furniture that's been there since she moved in. It was too dated for my taste, but I did enjoy the layout and size of the rooms. I guess that's the good thing about only having a few rooms on each floor - the rooms are bigger than they would be if the house had less square footage. 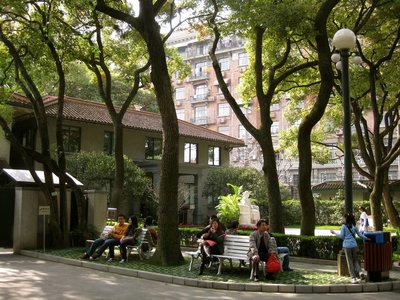 Nice shade from mature trees - a rare sight in downtown Shanghai. That's the museum wing you're looking at, not her house itself 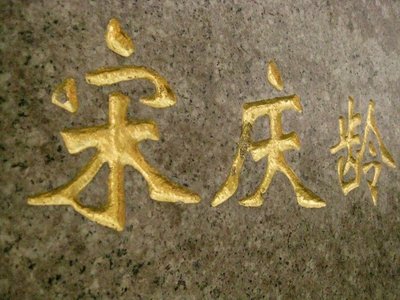 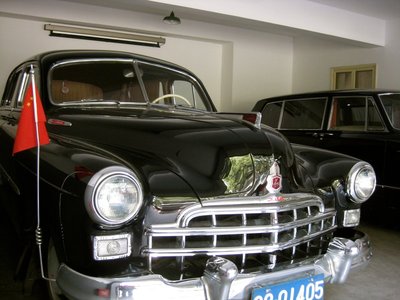 Soong Ching-Ling's two limos - the one on the left was a Russian-made limo and a gift from Russia. The one on the right is a "Red Flag" limo made in China

Besides the typical sofas, chairs and bedroom furniture in the house, Ching-Ling's typewriter and piano, etc. were there. When you go through the museum attached to the house, you can see several original letters that she typed out. So it seems reasonable to want to show the typewriter she herself used. What was strange, though, was where you see the typewriter - it was in the bathroom, which is between her bedroom and office. I asked the volunteer working there why the typewriter wasn't in the office and she told me she didn't know but also thought the bathroom was a strange place to put it. Too bad I can't show you pictures, so you'll just have to take my word for it.

I liked the house a lot (especially the backyard, which is probably bigger than the apartment building I live in!) and it reminded me of the Buena Vista area of Winston-Salem, NC. From the front, the house isn't pretentious, just stately. From the back, it looks like a great and very relaxing place to enjoy nature. Too bad no one can enjoy living there anymore. 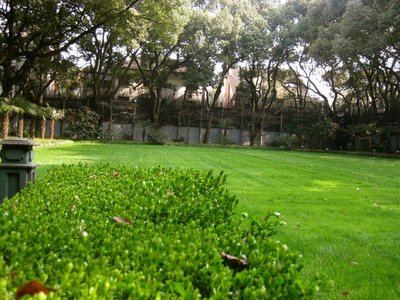 The luscious green grass of the backyard. Of course, it was off limits - you can look, but not touch

Posted by feiheli 22:15 Archived in China

Lived in Shanghai for 3 years and didn't know that this was here. Very cool. Appreciate the reference to Macon as well. :-)