Fenghuang by the Numbers

A very short trip to a very picturesque town 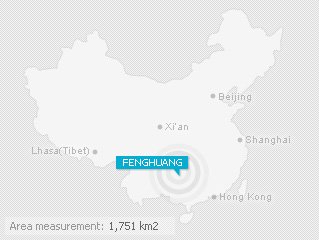 Two years ago while watching the weather report at the end of the news, the station showed pictures of different locations around China. When I saw the picture for Fenghuang (凤凰), which means "Phoenix," I think I gasped out loud. From that moment on, Fenghuang was among the top of my list of places to visit in China.

The opportunity finally came last weekend. One of my Shanghainese friends and I were planning on taking a short trip to South Korea, but when she had problems getting a visa, we decided to stay in China. I suggested Fenghuang and I had our plane tickets in hand just a few days later. While four days might be enough time to really enjoy all that Fenghuang has to offer, you also need to factor in travel time outside of those four days. We neglected to do that, so it meant that out of our four days, we only had about one day in Fenghuang itself.

I'm calling this entry "by the numbers" because it seems like a great way to show just how busy these four days were. First are some numbers you can find on the internet:

Actually, it's hard to find a lot of information about Fenghuang in English on the internet. So here are my numbers: 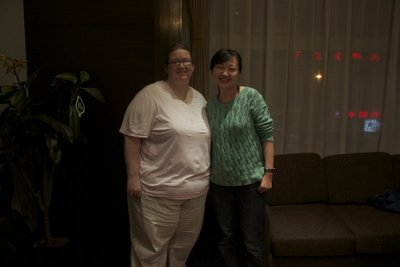 My former student, Ginny. Although her hometown is Changsha, I first met her in 1998 when she was studying in university in Shanghai. My friend and travel mate Sylvia unknowingly paid me a compliment when she said it didn't seem like it had been 12 years or so since Ginny and I had last seen each other. 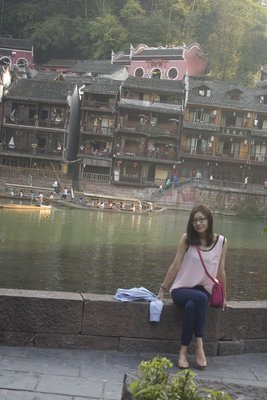 Sylvia at the riverside our first hour in Fenghuang. 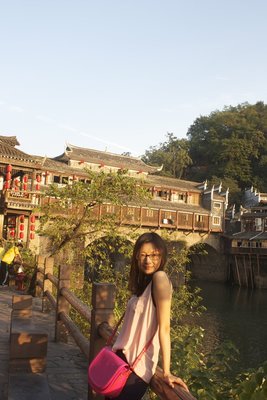 Sylvia in front of Fenghuang's "Hong Qiao" (虹桥) bridge. Interestingly, we flew out from Shanghai's Hong Qiao airport at the start of our trip. Notice how much nicer the light is in this picture than in the previous one. It's better in this direction because the sun was behind me. 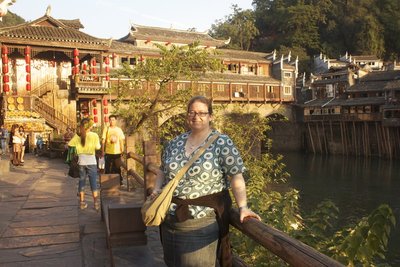 Me with Hong Qiao bridge 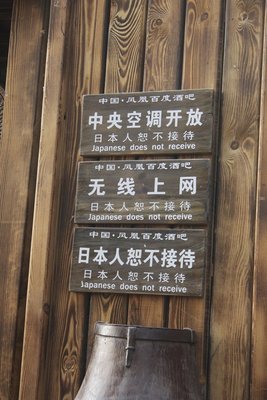 I've mentioned the "Diao Yu" (钓鱼) islands (known as the Senkaku islands in Japan), but perhaps the Americans reading this may not know why they're in the news here. China is currently in conflict with Japan over these islands, which may have a reserve of natural resources below them. I have no idea how new these signs were on the outside wall of this bar, but I thought it was interesting that the same English translation has been applied to all three signs. If you don't read Chinese, you don't know that the first sign means the bar has air conditioning and the second says that they have wi-fi. Also, the English isn't even translated correctly. I haven't included this picture to offend anyone and I have no vested interest in which country the islands belong to, other than the desire that the situation would be resolved quickly and without violence. (Sylvia's dad called to tell her that the biggest protests in China were happening in Changsha, the same day we headed back there. Fortunately, we were safe and the protests seemed to have stopped after the weekend.) 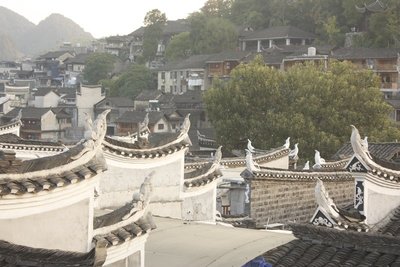 View of the rooftops near the vehicular bridge over the "Tuo Jiang," (沱江), the name of Fenghuang's river. 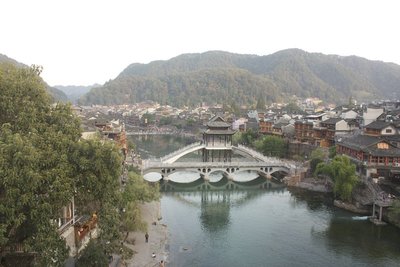 The bridge here in the foreground appears to be new - I never saw any people on it and I never saw pictures of it online when doing my research. But ain't it a beauty? 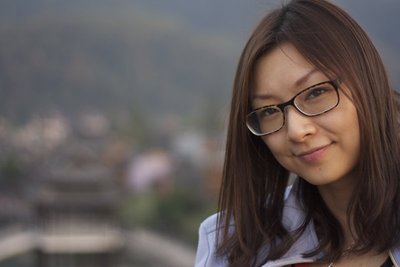 As my Australian friend and former colleague Michael would say, here's another beauty - Sylvia in front of the aforementioned bridge. 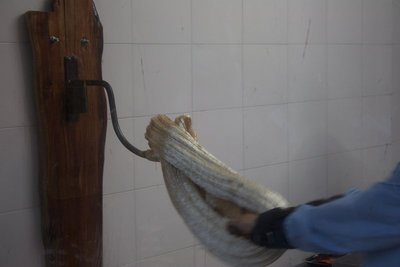 When Chinese people travel around the country, they love to try local foods and every city, town and region has its specialties. One of the specialties here is ginger candy, which you can see in its early stages being repeatedly pulled and stretched from the hook on the wall. 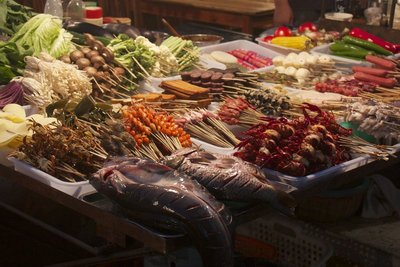 Some of the fresh food on offer at the outdoor barbecue grills. I don't know if Sylvia wanted any, but it would have been fine by me if she'd bought it and chosen not to share. 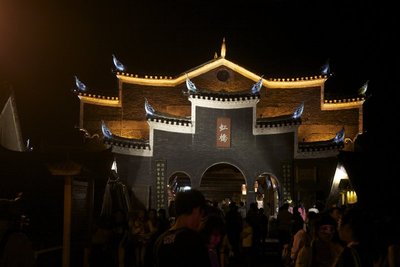 Hong Qiao by night. I'm not exactly sure why my daytime pictures aren't much to look at, but I'm extremely proud of my nighttime shots. Even though I left my tripod in the hotel, I was able to brace and prop my camera on railings and beside posts so that many of the shots are still clear. 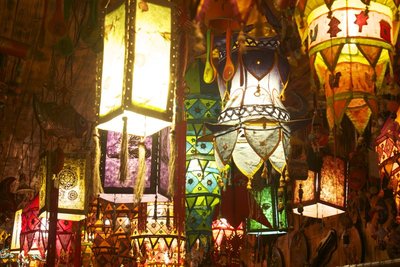 Lanterns hanging from the ceiling in one of Fenghuang's many souvenir shops. 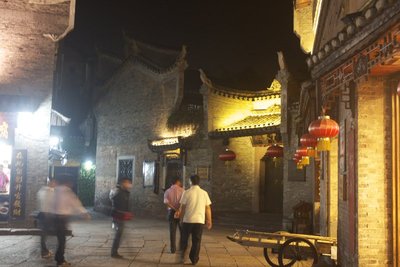 A pretty nicely renovated area of the old town. 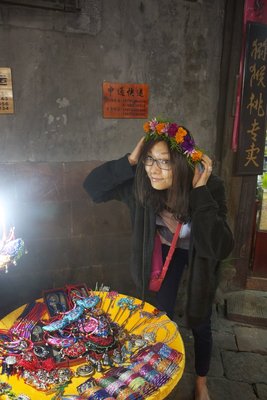 Sylvia bought a necklace at this spot. 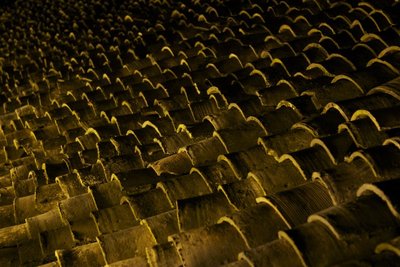 These are tiles on a roof adjacent to Hong Qiao bridge. I liked the look of how they just keep going and Sylvia pointed out their similarity to Xian's terra cotta warriors. I'd never had a desire to see the warriors before but now I'm anxious to see them with my own eyes and my own camera. By chance, I even caught an episode of a show about them on TV earlier this afternoon. I have to admit, they're pretty impressive. Even more incredibly, no two of the figures are alike. 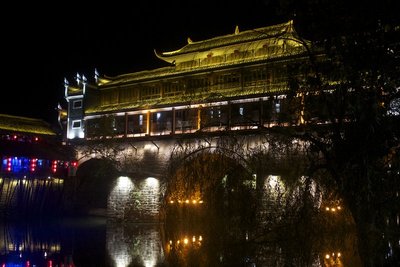 Again, Hong Qiao bridge. The lower floor is lined with souvenir shops and the floor above that was a tea shop. I'm not sure what was on the top floor. Maybe an incredible vantage point for taking pictures that I missed. Oh darn, I guess I'll just have to go back... 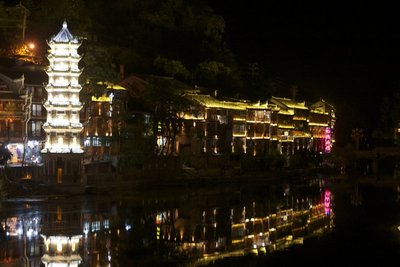 Our hotel/hostel was to the right of the pagoda behind the trees. This section of buildings here was basically the end of Fenghuang proper. Incidentally, it didn't seem that you could go to the top of the pagoda - I didn't actually go inside but I walked past it several times and never saw any stairs. 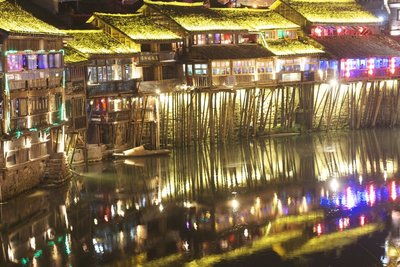 If you look on the left side of this picture at the point where the buildings and river meet, you'll see a small boat that looks remarkably like a slipper. For all I know, the resemblance is intentional. 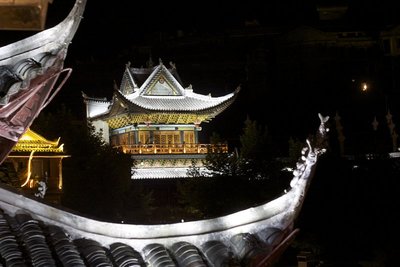 I'm not actually sure what this building is, but the way it's lit up, it seemed to be floating - this is actually one of my favorite shots from the weekend. 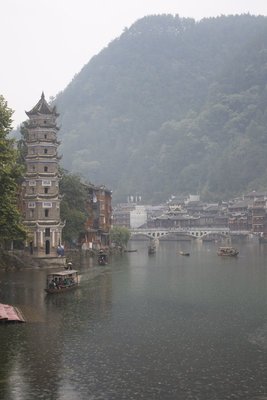 Sunday morning came with a persistent drizzle, which you should be able to see if you look at the surface of the water. Once again, my rudimentary photography skills have resulted in a washed-out scene. 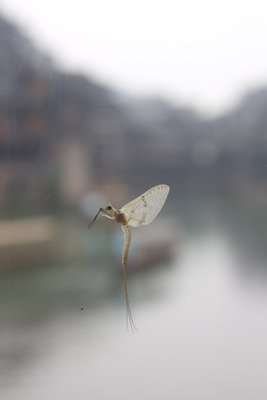 This little (dead?) guy was stuck to the window of our brunch-time cafe. 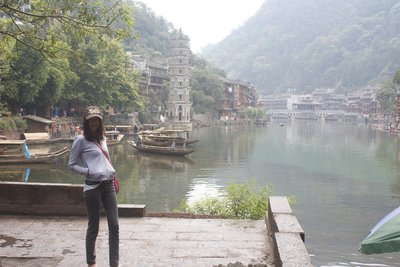 Sylvia striking a pose that's worthy of the catwalk. 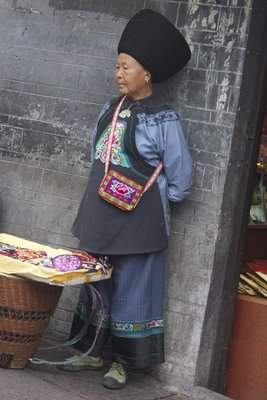 A local Miao woman waiting patiently to sell her wares. 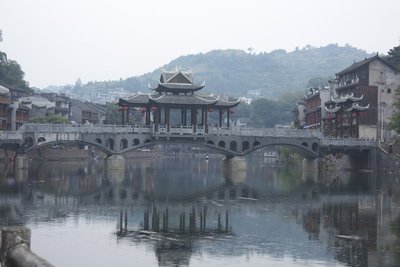 No, this isn't the same bridge from the day before. It's actually at the far eastern edge of town, closer to our hotel. 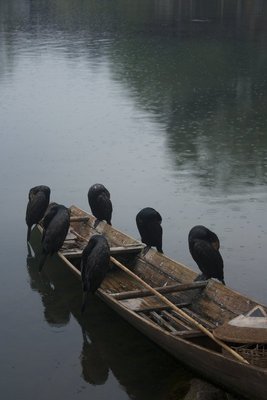 I believe these are cormorants. When we first saw them, they were all sleeping with their heads contorted and tucked into their backs (!). While I took pictures, first one, then another one woke up to stretch. A third woke up long enough to send waste streaming from his bottom into the river. 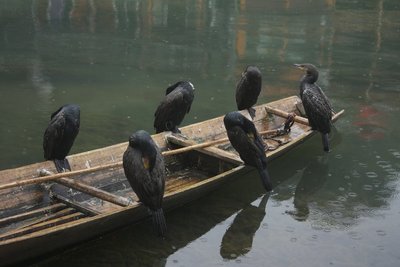 You can see the third one in the front row is awake now. Later, the one directly across from him also woke up. 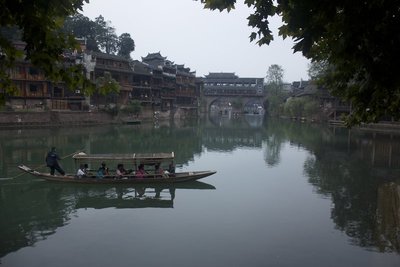 My last parting shot of Fenghuang on our way to the bus station - perfection!