On September 1st, I attended the third Chinese wedding I've been to in the past seven years. My first was in 2005 here in Shanghai when one of my students from 1998-1999 got married. The second was in March 2010 when I went to a small town in the countryside of China to see a friend get married (I met him when he was a guard at a friend's apartment complex in Beijing and I was staying at her apartment to take care of her dog while she was in America). This third one was my friend Jason's wedding. I met him when he was a student at my current school, and although he and a couple of other students and I used to hang out a lot, Jason wasn't in my class more than one or two times.

When Jason hand-delivered the invitation to me a couple of weeks ago, he told me that he wanted me to go with him to pick up the bride and do all of the other traditional things before the wedding. I made some non-committal noises and comments and heard no more about it until Friday afternoon. At that time, he sent me a message saying he'd pick me up at 7. Since I knew the wedding reception started at 6, I responded with a question: "7 pm?" He replied, "7 am," so I messaged him back and said "no way, that's too early." For a bit of background information here, my work hours are 10:30 to 7:30 every day and the absolute earliest I get up is around 8, usually more like 9. There was no way I'd be showered, dressed and ready to go by 7. And as much as I'm sure that I missed out on some great picture opportunities, I had to refuse.

Instead, Jason told me to be at the reception site at 4 because that's when he'd get there. I got there early and most of the pictures I have here are from prior to the dinner ceremony. 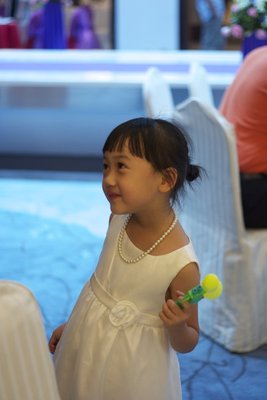 This little girl is one of the two flower girls, both are daughters of different cousins of Jason. I'm not really sure if they had any duties other than looking cute. Most of the Chinese wedding is just the reception rather than the ceremony. They may have had some official duties, but if they did, I didn't see them at work. 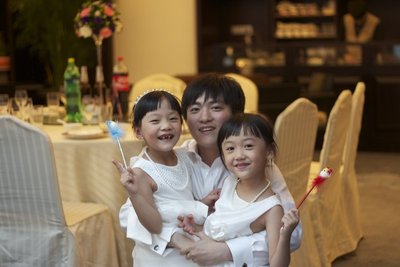 This is Jason with both of the girls. This is one of my favorite pictures from the reception. 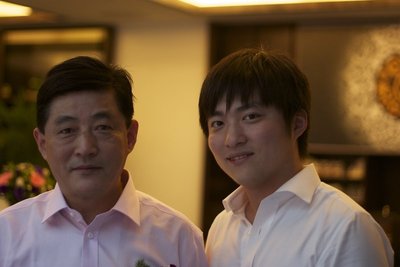 Here's Jason with his dad. I got a couple of pictures of his mom, but none of just her and Jason together, unfortunately. 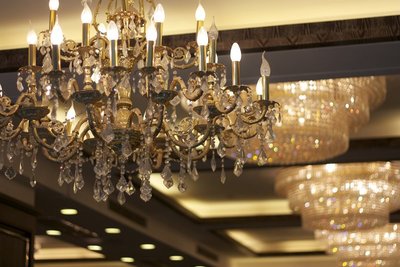 I really liked the chandeliers, but oddly enough, they were only on the bride's side of the reception hall. I don't know if all Chinese weddings are like this but at this one, half of the tables were on one side of a raised walkway and half on the other side. Like the seating in a church, each side was also for either the bride's or groom's family and guests. 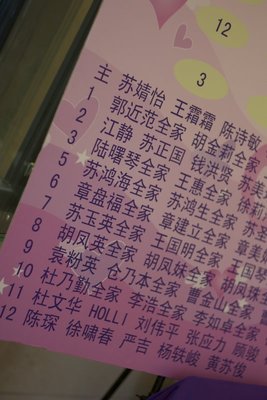 This is the seating chart for the guests. Guess how many non-Chinese people were there? That's right, just yours truly. I asked Jason why he didn't have my Chinese name printed on the chart and he said that he didn't know which characters were in my name. Hopefully, since I wrote a note for him and his wife in Chinese, he'll remember in the future. 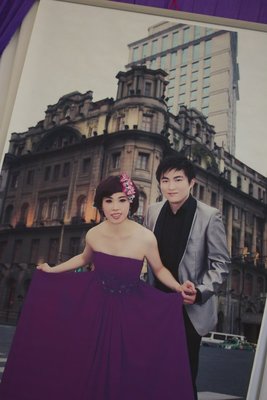 If you remember from my entry about the "Shanghai Film Park," I told you that taking wedding pictures is big business in China. The future married couple takes a day (sometimes an entire weekend) and travels from place to place having their pictures taken. They wear several different outfits from several different decades and centuries. In addition to giving one picture pride of place in their apartments, it's common to show many of these pictures at the reception. This is one they had taken at Shanghai's riverfront, the iconic "Bund." By the way, Jason's wife is Jessica. Perfect names for a young couple, Jason & Jessica! 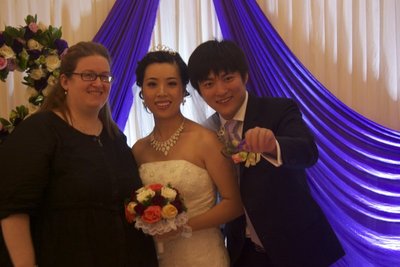 When I lived in Atlanta, I attended a Chinese church. In my three years there, I was a guest at many weddings. I remember the first one I attended, just a couple of months after moving there. After the ceremony and before the reception, the couple engaged in a curious event: they had their pictures taken with nearly everyone attending the ceremony. At the time, I thought it was a strange thing to do, but I also thought it was awesome. I've been to countless weddings where the ceremony ends, everyone shuffles out of the church so that the bride and groom and wedding party can run back into the church and pose for various pictures. Once the reception begins, you're lucky to get to talk to the couple for one or two minutes and maybe even get a picture with them. 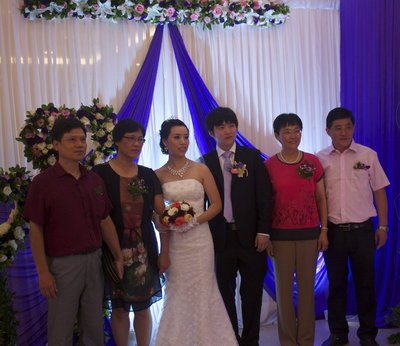 Jessica and Jason with her parents and his parents. 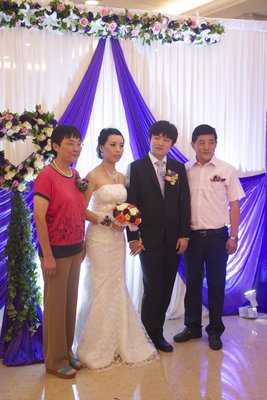 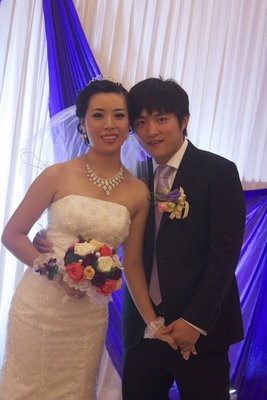 This is just one of 5 dresses Jessica wore during the reception. Unlike Americans, Chinese brides usually rent their dresses, therefore it's much more affordable to have 5 here than it would be back home. 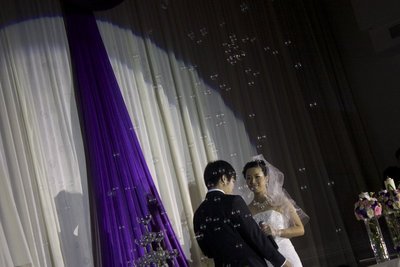 What I thought was a speaker on stage turned out to be a bubble machine.

Posted by feiheli 21:17 Archived in China