One of Shanghai's most fashionable shopping areas

It's the 27th of August and if I didn't get out and about today, I wouldn't have anything to show you for my touristy thing this month. Since it's still summer (translation: hot) and I didn't want to go too far away from my apartment, I decided to go to Xintiandi (it sounds like "sheen tea-in d," hereafter referred to as XTD). I love the buildings and atmosphere at XTD, but I almost never go there. Although I'm trying to see the touristy places, I don't like looking like a tourist, so I tend to avoid the most popular tourist sites as a rule. And even though it was a Monday afternoon, I saw at least one tour group following their flag-bearer through XTD's plazas. I read online that nearly all international and domestic tours in Shanghai include sightseeing time in XTD.

The pictures I have from there are nothing special - the heat kind of sapped my energy so I didn't feel too much like walking around to look for the best sites and angles. Also, there was at least one retired local man trying to take my picture. He lowered his camera after I said "no" twice, but I didn't want to stick around very long in case he decided to try to get my picture again when my back was turned. I figured out long ago, one of the reasons I love taking pictures so much is that it gives me an excuse for not being IN the picture. Also, who knows what he plans to do with that picture after he gets it - show off a "fat foreigner" sighting to his friends? Put it on the Internet? Something else? 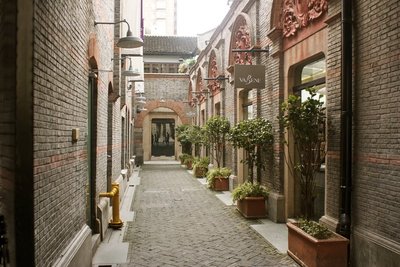 Wikipedia says that 3500 families were relocated from XTD. When places downtown are redeveloped, the people being dislodged get a choice: a lump sum of money that isn't enough to keep them in the area or a new apartment on the very fringes of the city, usually at least an hour's subway ride away. 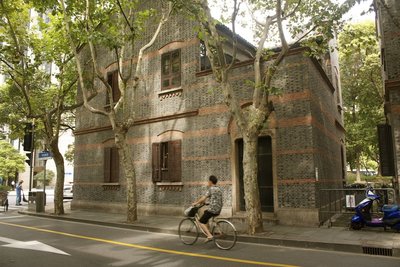 If and when I have enough money to build my own place, I want to model it on a house like this one. Although I only want one floor instead of two, I just love the look of the different colored bricks and how closed the first floor looks while the second floor has large windows and a balcony over the entry door. 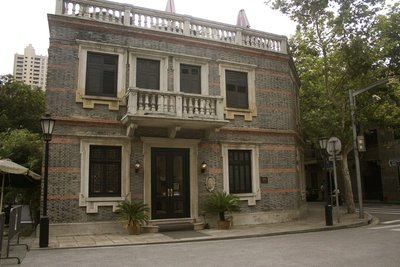 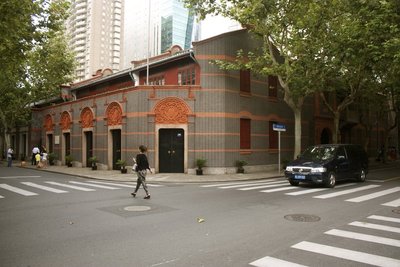 This is the site of the "First National Congress of the Communist Party of China." Some people say that since Shanghai is relatively young compared to other cities in China, it has no history. Nothing could be further from the truth and in fact Shanghai has several claims. In addition to being the current financial and fashion centers of China, the former "Paris of the East" and "Pearl of the Orient," Shanghai is also the birthplace of the Communist Party. 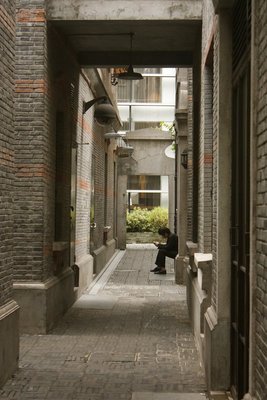 A worker taking a break in a quiet side street of XTD. 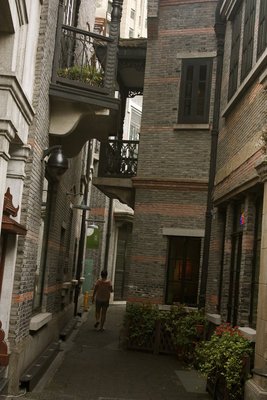 This is just gorgeous, isn't it? I waited and waited for a shot without people, but that's a fruitless endeavor in Shanghai. 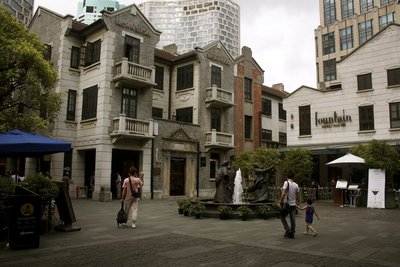 This square appears to be the largest open area in XTD. Much of it is tiny little alleyways and offshoots, like you see in the first, fifth and sixth pictures.

When I left XTD, I had one more place to visit: an antique camera museum. I'd seen a short segment about it on the art and lifestyle show (City Beat) a few months ago but hadn't been yet. Since these two places aren't far apart on the map, I decided it wouldn't be worth it to take a taxi, so I started walking. However, it turns out it wasn't in the location I thought it was. When I checked the map, it showed the museum at an intersection less than 1 km away (0.7 km, to be exact). When I finally got there, though, it ended up being 1.4 km away at an intersection farther south. I had to stop and ask for directions twice (I'm not a man, after all) and finally got there, only to find that the museum is closed on Mondays! I was hot and sweaty and must have looked amazing at that point with my frizzy hair forming some kind of messy halo around my red face. There was nothing else to do except take a picture of the closed door and the sign with the hours and phone number, then cross the street to get a taxi home.

Taxis were few and far between this afternoon, so I waited 5-10 minutes for a ride. While waiting, I did something that I've always been tempted to do and happily, it worked out. Right when I got up to the zebra crossing to look for taxis, a middle-aged Chinese woman put a piece of gum or candy in her mouth, then let the wrapper flutter to the ground. I got her attention and pointed at the wrapper (I would have picked it up myself if I could trust my back) She gave me a look that asked "what do you want me to do about it?" so I continued pointing at the wrapper and said "you dropped it." I was impressed that she didn't ignore me and actually picked up her trash, so then I suggested she give it to me since a trash can was a mere 10 feet away. Instead, she took it to the trash can herself and disposed of it properly. A Chinese man walking by saw this exchange and gave me a wide grin to show his support.

I wish I could say that someone dropping their trash on the street or ground was an infrequent occurrence, but in fact the opposite is true. Last week I actually got hit in the shin when the toddler in front of me chucked his drink box to the ground. He had shaken it a few times to see how much drink was left and when he realized it was empty, he tossed it. Since it hit me, I inadvertently made a noise and his dad realized what he'd done, so they turned back to pick it up. Unfortunately, some parents wouldn't do the same. Whenever I've asked students and local friends why some people do things like this, the standard response is "people here don't have enough education" or sometimes "it's someone's job to clean the street, so the trash won't stay there." While that's true, I don't think that's a valid excuse. Long story short, I was glad that the woman did the right thing.

Well, it's time for me to get to bed, so I think that's it for today. I would have finished this earlier, but some days my internet is REALLY slow and won't let me upload any pictures. I went to a wedding this afternoon and night, so when I got home I turned the computer on to try again and was successful this time. Hope you enjoy!

Posted by feiheli 23:41 Archived in China