The "Market" at People's Park & then a little jewelry exhibition

I include maps because I know my mom wants to see them, but I either have to zoom in so much that you have no point of reference as to where in Shanghai the site is, or I have to zoom out and then you can't see any details. Fortunately, the site I visited last week is very near my apartment so you can see both places on this map. My apartment is right next to the West Nanjing Road Metro station on the left-hand side of the map and I went to People's Park, just one subway stop away on the right-hand side.

On Sunday, I met a friend and former colleague, Avril, for an afternoon looking at jewelry in the museum in People's Park. Since she had bought a large frappucino before we met and couldn't take it in the museum, we walked around the park for another 10-15 minutes so she could finish her drink. I was glad we had the opportunity to walk around because I've long wanted to include some pictures from there in my blog. There's an informal market that has been taking place there for awhile. Shanghai is full of all kinds of markets - countless food markets, a few fabric markets, a "fake" market down the street from my apartment (it sells fake Coach, fake Prada, fake Gucci, fake "you name it," etc.), at least one camera market and this one - a singles market.

People come here to display and look through ads from singles and when I say people, I mostly mean parents. I asked Avril if these singles know that their information is being put up in the park and she guessed that most of them have no idea. I half wonder if one of them will see a picture from my blog and say, "Hey! That's me! I had NO idea my parents were up to this!"

I took a few pictures here, but none of the singles are suitable for me since it seemed that most of the ads were for women. I find that very interesting considering a statistic I once heard about the ratio of males to females here. China has historically preferred sons and although families have downsized drastically due to the one-child policy in effect for the last 30+ years, many people still cling to the tradition of wanting a son first and formost, therefore males outnumber females by 60 million. (This is the answer to the question "why are so many Chinese girls adopted out of the country?") That means 60 million men will never get the chance to marry. So I wonder why it is that most of the information displayed was for women?

I've joked with friends many times that I want to go there and look for myself. I'm looking for a few very specific details that are probably going to be hard to find: 1.9 meters (6'3" for you Americans reading this) and Christian. I like to tell my students that I have 3 criteria if they want to help me look. First I tell them, he should be Chinese or overseas Chinese. And they always reply, "no problem!" Then I tell them that I want a tall man, at least 1.9 meters tall. And they kind of suck air through their teeth and say, "that's difficult, but we'll try to find him." Lastly, I tell them that the man must be Christian and they let out a snort of disbelief and say "impossible, he doesn't exist!" I wonder how many of those 60 million men meet my criteria??? 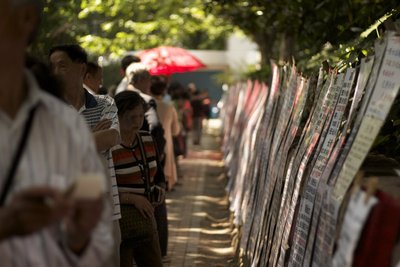 This is just a small example of the number of ads on offer. Actually, the people who posted these ads paid 10 RMB for their ad to be there one month. They've all been laminated and then displayed like vertical banners 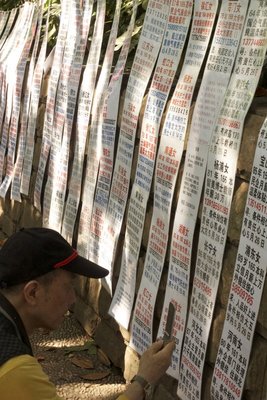 Apparently this man found a suitable daughter-in-law. I took a picture of him capturing her information. The information on these ads tends to be standard: gender, age, height, amount of education and job field are typically listed. I even saw some that mention their monthly salary!

After Avril finished her frappucino, we went to the museum inside the park. Apparently it doesn't have a permanent display, but instead hosts different exhibitions throughout the year. Since Avril is an artist and enjoys making her own jewelry, she suggested we meet up at the park to see the Van Cleef & Arpels exhibition. It sounded like fun (and definitely something I wouldn't think of doing on my own, therefore "touristy"), so we paid 30 RMB each (about $5) and went inside.

Everything was pretty dark inside and I'm not exactly sure why. I can't imagine halogen lights would damage jewelry - even antique jewelry - but it was very subdued lighting throughout the building. I thought I'd seen a sign at the entrance saying picture-taking was forbidden, but once I got in and saw everyone with their cameras out in full view of museum staff, I joined in. No one ever tried to prevent me from getting a picture. 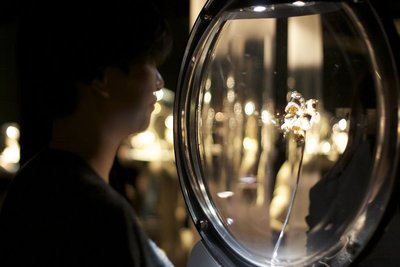 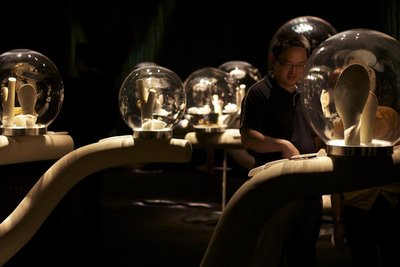 I was very happy to get such crisp pictures in a dark environment. I hadn't taken my tripod with me so everything was handheld, therefore susceptible to camera shake 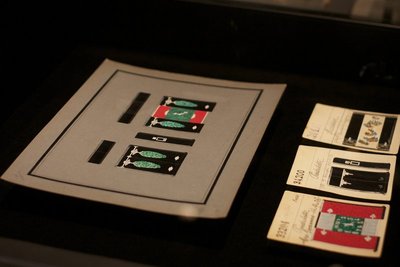 Honestly, I think I enjoyed these drawings even more than the jewelry itself. I thought the colors and details here were just beautiful 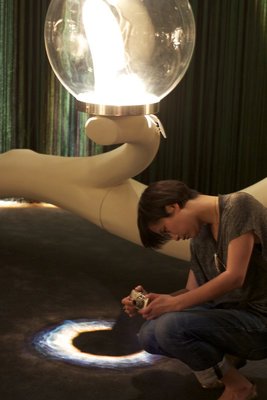 This is Avril again. I like this picture because you can see the circle of light cast down to the floor from the orb above 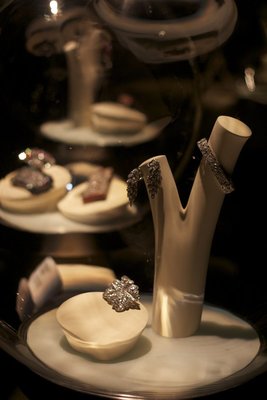 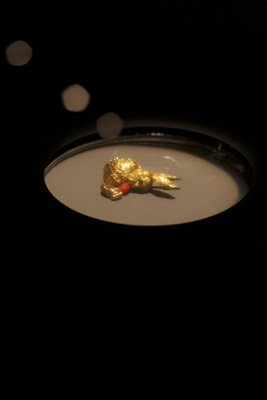 A rabbit. This was really hard to get a shot of - the rabbit was inside a round, enclosed table thing-y. On top of the thing-y was this glass that created a 3D-like effect so that the rabbit appeared to be sitting on top of the glass 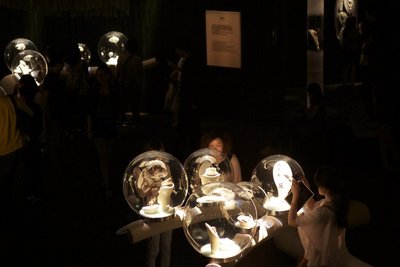 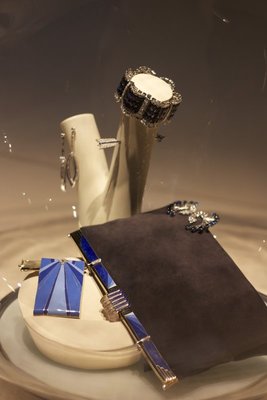 Since blue is my favorite color, I really liked this bracelet. I'm not a big fan of the Art Deco purse and other thing, though 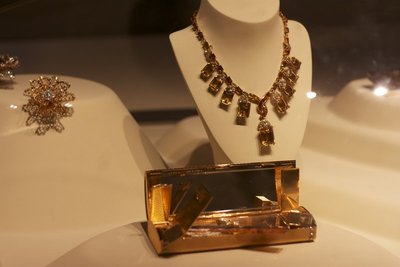 I assume this is topaz 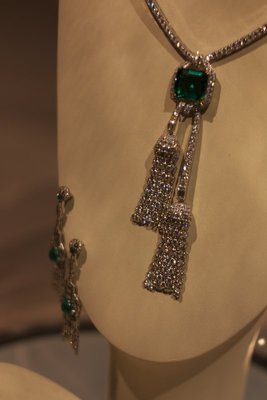 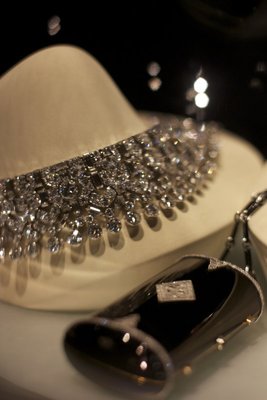 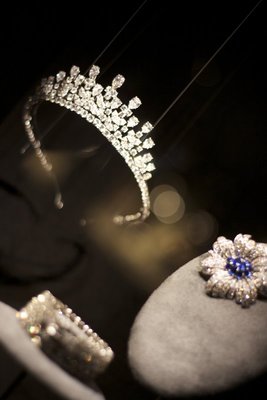 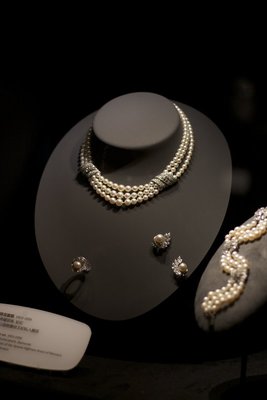 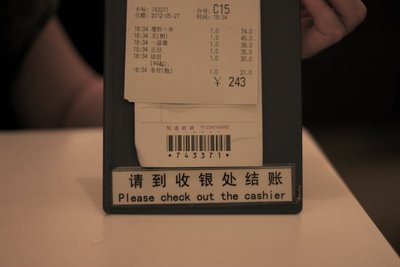 After the museum (and church for me), Avril and I met up again to go to dinner. We went to a popular Hong Kong-style restaurant and when I saw the receipt holder, I couldn't resist taking a picture. After dinner, I did indeed "check out" the cashier, but I didn't think she was exceptionally pretty. Just normal...

Now, this has nothing to do with any of the pictures you've just seen, but I feel like I should tell you about it because it's a bit of an "aha!" moment for me. When I went to Changshu with friends and we were walking from the bus stop to the tea shop, a kid - probably around 12 years old - saw me and said "Fat!" I whipped around and told him, "I understand what you're saying! Foreigners don't like when you talk like that!" That's pretty much my standard response any time someone calls me fat (usually kids, but sometimes middle-aged people, too). Invariably, the response I get to that little speech is a widening of the eyes and a ceasing of the tongue. I admit, I am fat, but fat is a relative term. Even a person considered normal-sized in America will be called fat here in the land of predominately petite, small-boned people. Therefore, I think it's important for people to understand what "fat" really means and to know that using the word around a foreigner is probably never a good idea.

When I fussed at the kid about it this time, one of my friends pointed out to me (probably because she was embarrassed by my reaction), "I don't think 'fat' is negative in China." I think she's been proven to speak the truth, but I still can't accept it (no matter how true it is!) when the comment is accompanied by a stare or a laugh once I've passed by. The word may not be rude in China, but the actions that go with it certainly are! Don't even ask me the number of times Chinese friends with me have been asked "how much does she weigh?"

Anyway, last night while flipping through the channels on TV (apparently since Li Na wasn't in the women's final of the French Open this year, China didn't feel the need to show any more tennis to the fans living here!), I came across a show that teaches English to children. There are some cute cartoon characters and the sentences that are being taught are spoken slowly and repeatedly so that people can practice and learn. I've got no beef with the teaching method there - I imagine the children watching it can learn a lot. What I DON'T like is what's being taught.

When I was watching it, the speaker was saying sentences like "He's my friend. He's fat. She's my friend. She's thin." and "He's fat. He's good at math. Who is he? She's thin. She's good at singing. Who is she?" No wonder kids feel the need to say it in my presence (although they're not practicing English from the show since they always say it in Chinese). It turns out my friend is right - maybe it's not negative or meant to be an insult. It's just a hard adjustment to make when you come from a culture where words like that are never said in the person's hearing.

One more "fat story" and then I'll sign off. I actually overheard this story one morning on the subway on my way to work. Before I tell you, I just want to point out that this could happen anywhere - I'm not singling China out as a place with rude people. But it did happen here. Apparently there was a large white man at the airport and several Chinese men were making fun of him and saying some impolite things about him. A Chinese woman went up to them and told them that they shouldn't talk like that because it was rude. They replied, "It's okay, he doesn't understand what we're saying." Then, the person telling this story on the subway, a white male, went up to them and speaking Chinese said, "He might understand. Many of us can understand and speak Chinese." I think he said that the men shut up then.

So what's the moral of the story? If you see someone you think is fat, you don't need to tell them - it ticks off those of us who are and upsets those people who really aren't.

Posted by feiheli 08:15 Archived in China